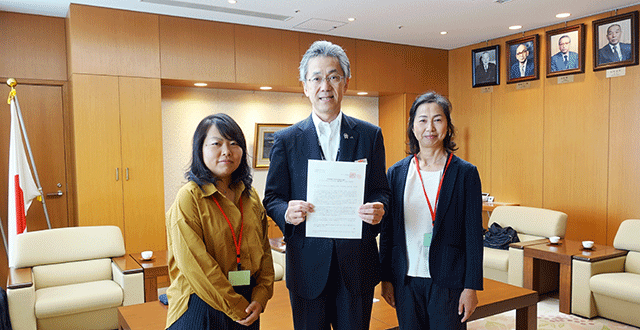 On September 12, 2018, representatives of the members of Seikatsu Club visited the National Federation of Agricultural Cooperative Associations (JA ZEN-NOH) to request the continuation of the ‘Long-term Seed Supply Agreement,’ which seeks the continued supply of NON-GM corn to enable the future consumption of livestock products that have been produced using NON-GM corn.

Declaration of intent to “continue to use NON-GM corn” 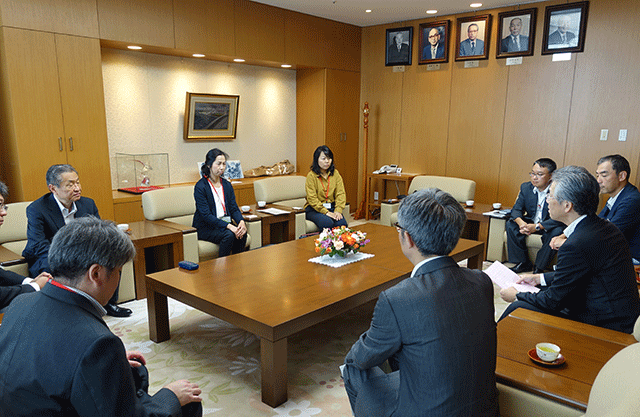 Representatives being briefed on recent trends in the production of NON-GM crops in the U.S.

The current situation is that Japan is almost totally dependent on U.S. feed corn. However, the cultivated areas of NON-GM corn in the U.S. have fallen, reportedly to just 8% of the total as of June 2018. Seikatsu Club is cooperating with JA ZEN-NOH, who handles imports, and U.S. corn producers to continue the production and supply of NON-GM corn into the future.

In 2011, Seikatsu Club concluded the first five-year “Long-term Seed Supply Agreement” with a U.S. seed company that develops NON-GM seed, CGB Enterprises, Inc.* and JA ZEN-NOH. This agreement secures NON-GM feed corn seed for cultivation in the U.S. up to 2020.

For 2021 and thereafter, Seikatsu Club members’ representatives will travel to the U.S. next month (October 2018) to request the seed company to continue the production of NON-GM corn seed. We plan to conclude a new five-year long-term seed supply agreement in 2019 for the period 2021 to 2025. The first step toward this goal was our declaration of intent that “Seikatsu Club will continue to use NON-GM corn.” 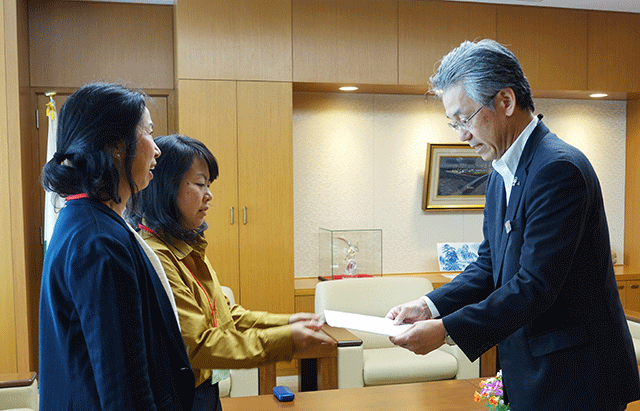 Handing over the Seikatsu Club request

On behalf of the SCCCU Consumption Committee, Ms. Akemi Ohkubo (Vice-chairperson of the Board of Directors of Seikatsu Club Kanagawa) and Ms. Mari Yamamura (Vice-chairperson of the Board of Directors of North Tokyo Seikatsu Club) handed over the letter of request, which read, “In the future, we will continue to eat livestock products that have been raised using NON-GM feed corn. This is a request that carries the convictions of 390,000 Seikatsu Club members, and we hope that you will give it your most serious consideration.”

Mr. Yoshifumi Kuwata, Managing Director of JA ZEN-NOH, indicated his feelings by saying, “With the severe situation surrounding NON-GM crops, we believe the renewal of this long-term seed supply agreement is crucial. I accept this request from you with the conviction that it has been signed by 390,000 people. Since we are only able to negotiate with the seed company because all of you are using the seed, we sincerely hope that you will continue to work with us in the future.”

This visit became a valuable opportunity for mutual reconfirmation of the importance of NON-GM corn by both consumers and feed importers.

Ms. Yamamura said, “We on the food consumers’ side have very few opportunities to communicate our feelings to producers. I would like to make sure that I give everyone an accurate picture of what we see during the October visit to the U.S.” Ms. Ohkubo spoke of her determination by saying, “Since we have 390,000 household members, more than double that number of people must be eating Seikatsu Club consumer materials every day, if we include the families. Of course, all our members would like to have these NON-GM crop seeds passed down to the next generation, and for that reason I intend to make a firm request to U.S. producers by meeting with them face to face.

For the stable supply of U.S. NON-GM feed corn, Seikatsu Club will continue to push forward with activities aimed at the conclusion of the five-year seed supply agreement for the five years beginning in 2021.