Leader of a community garden, Jessica (center), with members of the group

After the Lehman Shock in the United States, the younger generation, known as the millennials*, began to have doubts about the American economy and way of life, with many aspiring to a lifestyle that is closer to nature and more environment-friendly. We were able to gain a tangible awareness of this new American movement during the visit.

**The generation of young people born in the 1980s and 90s. They are ‘digital natives,’ people who were born into a society where the Internet and social media already existed and are therefore a generation who have a new set of values that differ from those of previous generations. 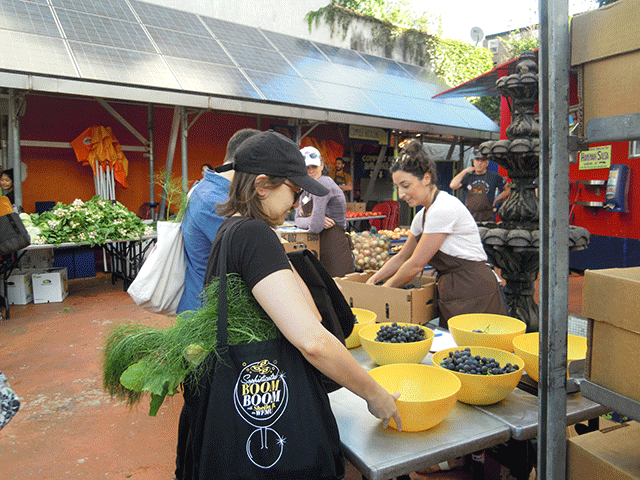 New Yorkers collecting their vegetables at the Green Harvest CSA

This 11-day tour visited the three cities of New York, Washington DC and Maddison, Wisconsin. Firstly, in New York we made a study visit to the Park Slope Food Coop, said to be the most successful food co-op in New York with 17,000 members. The characteristic of this co-op, with its very rich lineup of organic produce, is that all members provide 2 hours and 45 minutes of labor every four weeks, thus holding down prices and making it possible to purchase organic food relatively cheaply. Ms. Masako Yonezu of the Seikatsu Club Consumers’ Co-operative Osaka said, “As all the members participate in the work in this community-based co-op, I felt that there was a very strong sense of community between the members.” Working in the shop confers a certain status on the members; a young man who was working on the shop floor on the day of our visit proudly stated, “I am contributing the community by working here.”

The popularity of organic produce is growing mainly among the younger generation. In New York, we were able to see people coming to collect their produce from Green Harvest, a community-supported agriculture (CSA) organization, an organization where consumers subscribe to the harvests of a certain farm or group of farms to support their work. The vegetables, eggs, yoghurt, beef, chicken and other foods produced in the New York State countryside are delivered to the square in front of a restaurant in a residential area every Saturday from June to November. The members were gathered in the square to collect their produce for the week. We talked to the leader, Phillip, a father with a small child, who told us, “We can now buy organic vegetables at supermarkets and more consumers now prefer to do that, but collecting the vegetables each week through CSA makes it possible to plan the whole week’s meals very easily, so I’m very happy with CSA.” 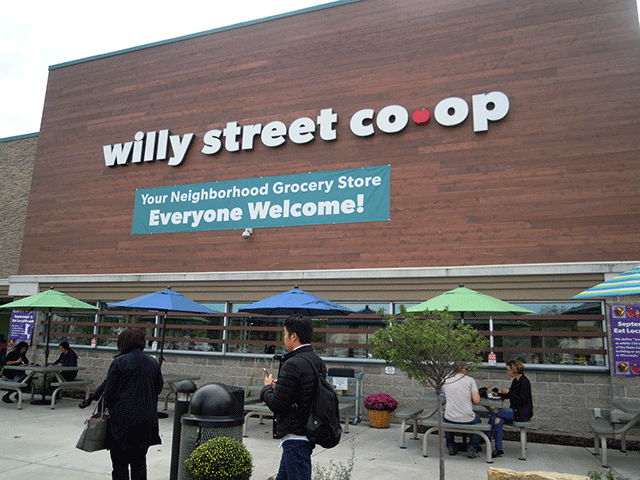 The shop front at the Willy Street Co-op

In Maddison, we visited the North Store, the most recently-opened store of Wisconsin’s largest consumers’ co-operative, the Willy Street Food Co-op. The store had been opened in an area where relatively low-income people live. The supermarkets had left the area, and as there was nowhere to buy fresh food, the city asked the co-op to open a store there. One of the participants in the group, Ms. Keiko Katsumata (Sagami Seikatsu Club Consumers’ Co-operative) said, “I’ve heard that there is a lot of obesity and poor health in this area because meals often consist of fast food, and the people here are not very knowledgeable about healthy diets.” 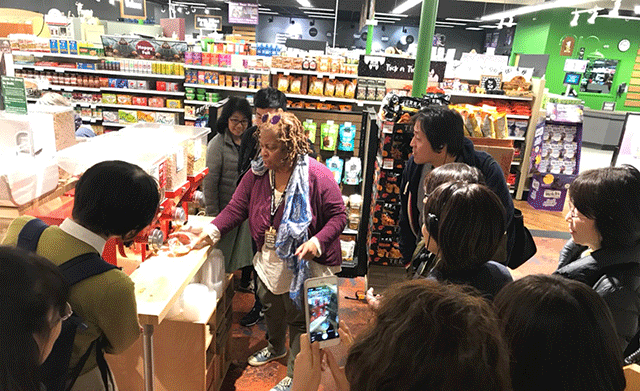 Jennifer, a staff member at the Willy Street Food Co-op, explains the weighing of bulk food

Ms. Katsumata continued, “At this consumers’ co-operative they give free courses on the kinds of food to buy and how to cook healthy meals.” Another participant in the visit, Ms. Kazumi Kase of the North Tokyo Seikatsu Club Consumers’ Co-operative said, “The food co-op also functions as a workplace, generating lots of employment, and is a store that performs exactly the role that a consumers’ co-operative should by contributing to the daily lives of the members and carrying out dietary education.

Workers’ Co-operatives as Workplaces for the Disadvantaged 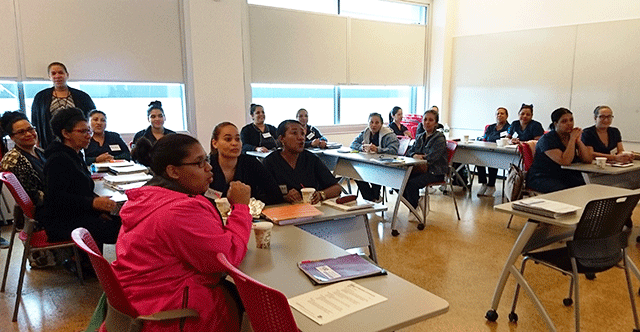 Women in a nursing care workshop at CHCA

Also in New York, we enjoyed a study tour with the headquarters and training facility of CHCA (Cooperative Home Care Associates), a workers’ co-operative that provides home care for the elderly and disabled. CHCA trains many women, including unemployed women, for the provision of quality home care services. On the day we visited, many Hispanic women were receiving training in Spanish.

In New York, the movement to make practical use of workers’ co-operatives is becoming very active as a means of providing workplaces for people in disadvantaged situations, such as immigrants. We had an opportunity to talk to members of a new type of co-operative that utilizes the Internet, UP&GO. It’s simple to make an appointment for home cleaning from the UP&GO website. Home cleaning services by appointment is one of several kinds of workers’ co-operatives that have been started up by immigrants from Central and South America.

While this kind of online service often finds roughly half of its profits go to the company that operates the smartphone appointments system, UP&GO’s commission is only 5% and the remaining 95% is paid to the workers’ co-operative that actually does the cleaning. “I previously worked for another home cleaning company, but now my income has increased and UP&GO also helps me to expand my users,” said Saul Dominguez, an immigrant from Mexico and a founding member of the Bright Cleaning Co-operative that participates in UP&GO.

Ms. Kumi Oka of the Consumers’ Co-operative S-Coop Osaka had this to say about the efforts of CHCA and UP&GO. “I learned that those people who are considered to be ‘the poor’ are improving their quality of life, such as raising the quality of their working environment and labor and earning higher wages, by working at a co-operative. I was happy to be able to see practical examples of co-operatives creating an alternative economic society.” 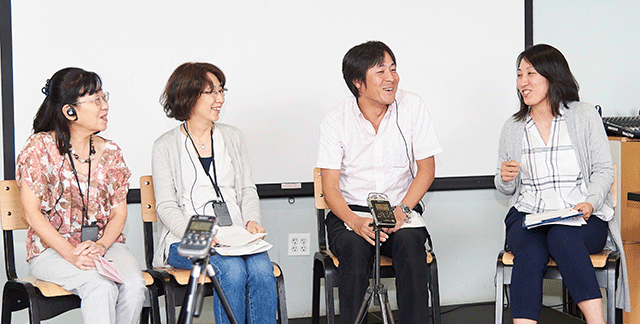 CEANYC (Cooperative Economics Alliance of New York City), a New York-based network organization of a variety of co-operatives, hosted a public event at which we were honored with an opportunity to introduce the activities of Seikatsu Club. Ms. Noriko Tanaka of Seikatsu Club Consumers’ Co-operative Tokyo, who gave our report at the event, recalls, “We were welcomed by very enthusiastic young people. At the places we visited, we were frequently asked questions about Seikatsu Club, giving us a real feeling for the fact that people know about Seikatsu Club even in the US.”