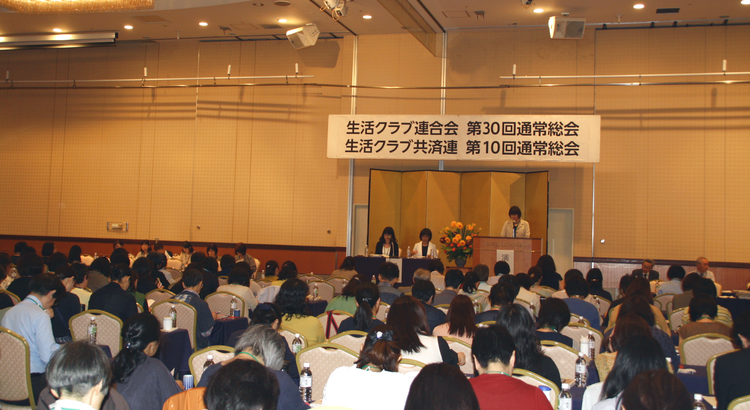 On June 24, 2019, Seikatsu Club Consumers’ Co-operative Union held its 30th Annual General Meeting (AGM) in central Tokyo. A total of around 560 people, including delegates (who total 369 persons) from member unions, guests of honor, observers and the secretariat gathered for the meeting.

Following the FY2018 activity report and financial report, the action plan, budget and other policies for FY2019 were proposed, all resolutions being approved by large majorities.

Supplementary elections were also held at this year’s AGM, the result of the voting by delegates present being that all the candidates for the ten directors’ positions and one auditor were successfully elected.

A special resolution titled “We Express Our Concern Regarding Commercial Distribution of Genome Edited Food and Will Push Forward with Countermeasures Together with Consumers” was also proposed to the AGM and adopted by acclaim.

Following the AGM, the 10th AGM of the Seikatsu Club Consumers’ Co-operative Union of Mutual Aid was held at the same venue, all resolutions being adopted as proposed by large majorities.

June 24, 2019
The commercial distribution in Japan of genetically modified (GM) foods was given approval in 1996. In the following year, at the FY1997 Annual General Meeting, we determined not to handle GM foods and initiated countermeasures including gaining the cooperation of producers regarding raw ingredients. We have also been implementing a continual policy recommendation movement, demanding that the government introduce such policies as restrictions on distribution and compulsory labelling. Our countermeasures against GM ingredients in consumer materials has currently reached a level where only the issue of trace ingredients remains in a small number of consumer materials.

At the same time, the food industry is actively promoting R&D for the use of GM technology in economic activities. Genome editing is also a GM technology, but as its high efficiency in manipulating genetic material enables faster and cheaper development when compared with conventional GM, it has rapidly moved toward commercial realization to the extent that it is said that genome-edited food products may be distributed on the market without compulsory labelling before the end of this year. We have little option but to harbor a serious sense of impending danger regarding commercialization that stresses only the economic benefits of genome-edited foods and an administration whose ongoing response to these foods is to promote them without sufficient disclosure of information on their diverse and long-term risks.

Four issues regarding genome editing (food safety, biodiversity, seed monopoly, and regulatory restrictions) were articulated at last year’s AGM, when we expressed our concerns about commercialization. Following this, Seikatsu Club Consumers’ Co-operative Union, member co-operatives and producers began to hold study meetings to encourage the sharing of the issues on this question.

When we determined to revise our “10 Principles for Seikatsu Club Consumer Materials,” members and producers carried out repeated discussions together, consequently declaring in the preamble that “we develop our consumer materials from a standpoint of mutual equality and realizing ‘a society where people can live in safety and security’ through the collective purchase of these consumer materials.” In addition, the second principle of “non-acceptance of genetically engineered raw ingredients,” clearly states that “We oppose ‘the genetic modification of food,’ which is inimical to bioethics and facilitates corporate dominance.”

Based on this principle, our basic stance will also be to not accept genome-edited foods as raw ingredients for consumer materials.

Let us hold fast to the “10 Principles for Seikatsu Club Consumer Materials,” have respect for food safety, health and the environment, and build a sustainable society together with our producers.
Published on June 26, 2019
Tweet