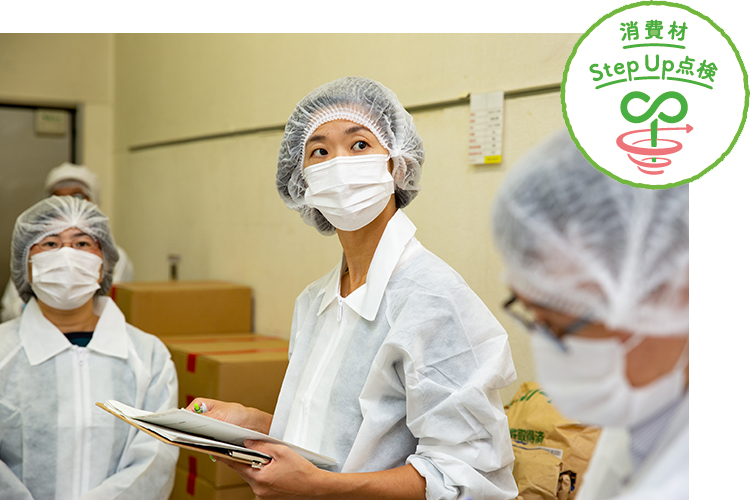 The Consumer Materials Step Up Inspection is a unique Seikatsu Club activity in which members visit the consumer material* production site to carry out a face-to-face inspection to confirm that the product is being manufactured strictly according to the standards that have been jointly agreed upon.
* Consumer materials are the goods handled by Seikatsu Club, many of which are original products developed through cooperation between members and producers.

Producers review their manufacturing process and make new discoveries due to frank questioning by the members, and visiting the production site gives members the opportunity to gain a deeper understanding into the superior aspects of the consumer material and the special attention paid to the manufacturing process by the producer. In this article, through such a dialogue between the members and the producer, we introduce the activities conducted for a consumer material quality step up during an actual visit.

The producer of the “Fluffy Cheese Dog,” the subject of this inspection, is Misawa Foods Co., Ltd., which handles a large number of our Seikatsu Club confectionary items. The product is actually manufactured by Tokyo Shitamachi Labo Co., Ltd., a subsidiary of Misawa Foods.

The Fluffy Cheese Dog is a confection that consists of processed cheese wrapped in waffle-like dough. The raw ingredients are Seikatsu Club pancake mix, eggs, aluminum-free baking powder, which, as the name suggests, are baked to be nice and fluffy. The combination of the sweetness and cheese is delicious, and the Fluffy Cheese Dog is very popular as a children’s treat or snack. 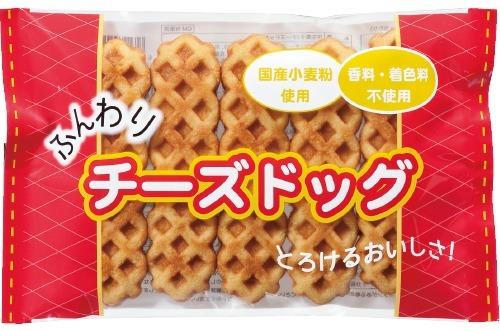 Participants in the Consumer Material Step Up Inspection were President Yuji Makino of Misawa Foods, President Toshihiro Misawa of Tokyo Shitamachi Labo, and plant director Yoshitaka Kono, along with four members from the Autonomous Inspection Committee of Seikatsu Club Consumers’ Cooperative Union (SCCCU), one SCCCU observer, and one member of the SCCCU secretariat.

During the exchange of views before the inspection, one of the members, Ms. Sekiguchi, said that the purpose of the inspection was to “take a direct look at and confirm the quality control based on the HACCP management method, and to scrutinize the relations between production and consumption.”

HACCP is an abbreviation of “hazard analysis and critical control points,” and is a management method for securing safety in food manufacture. HACCP prevents untoward occurrences before they happen by identifying and analyzing in advance the points at which microorganisms and contamination by foreign matter may occur in the entire process from the reception of raw ingredients, during manufacture and, finally, to shipping. Management procedures are then established at each of these critical control points.

President Makino replied by saying, “We have had a long relationship with Seikatsu Club, and I have met many members through the producers’ exchange meetings and other events. The Consumer Materials Step Up Inspection differs from the exchange meetings as we are in the position of being inspected. Because of this, we are a little tense, but we want to take the inspection very seriously in order to be able to take advantage of everyone’s opinions in our overall production management in the future.” 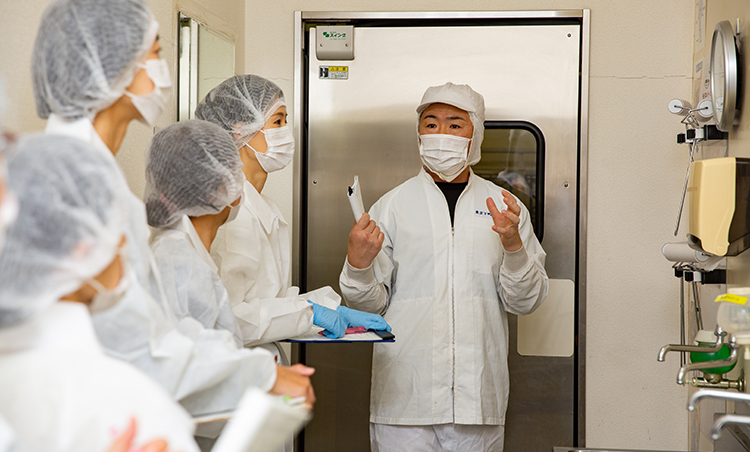 Tokyo Shitamachi Labo plant director Mr. Kono explaining the manufacturing process
In order to fully maintain hygiene management, when entering the production line area in the plant it is necessary to change into the same clothing as employees at the plant, which consists of white overalls and hat, face mask and boots. Following that, to prevent hair, dust and other possible contaminants entering the plant, a roller is passed up and down the clothing for 30 seconds, after which hands are washed in liquid soap for 20 seconds and rinsed for 10 seconds. 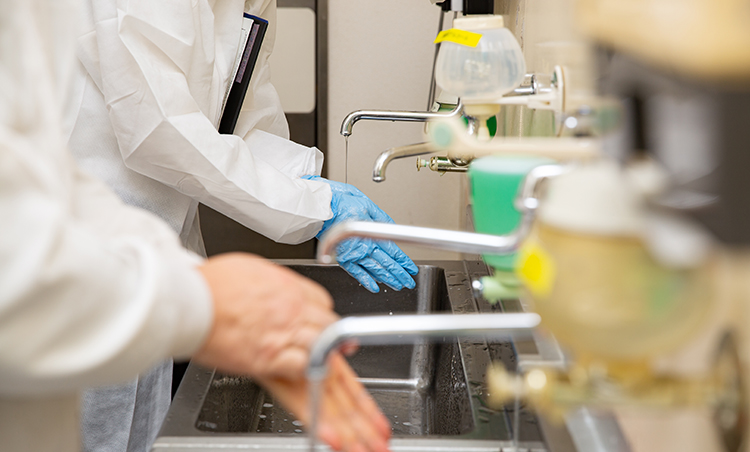 Careful washing of hands for 30 seconds

One of the members asked, “How did you decide on the 30 seconds for the use of the roller used and for washing hands?” The plant director Mr. Kono replied, “30 seconds is generally the time used at present in manufacturing circles. Any grime or dust can be washed off in 30 seconds. Contamination incidents by foreign matter have been reduced to zero through the introduction of the 30-second rule.” 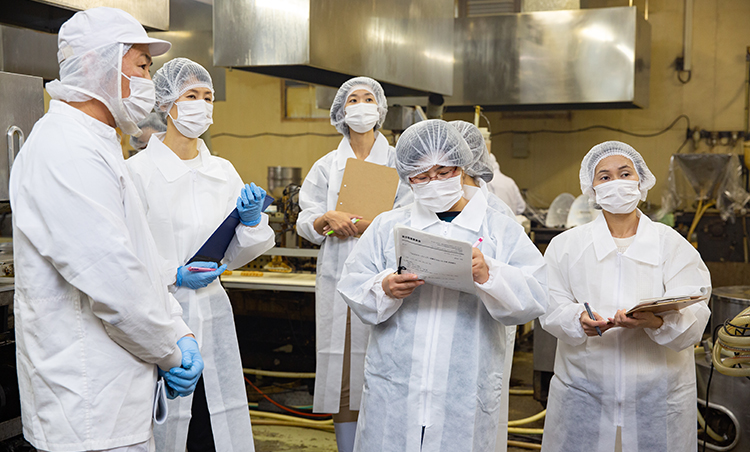 The production process of the Fluffy Cheese Dog was then inspected for about 90 minutes. Many tasks in the production process were carried out carefully by hand. It is general in the manufacture of processed foods to use an emulsifying agent to ensure that aqueous and oily ingredients do not separate. As Fluffy Cheese Dog does not use an emulsifying agent, however, a mixer that has two whisks instead of the usual one is used to ensure smoothness and uniformity of the ingredients. (This is a mixer specially made to Seikatsu Club specifications.) In addition, we were also told that since the dough mixture will precipitate or separate out if it is left for some time after mixing, it is sometimes mixed with a hand mixer before being poured into the baking mold. Extraneous dough remaining after baking can lead to scorched remnants in the baking mold, and so these are removed by visual inspections of the mold.

Besides this, the cheese cutter is also a purpose-built machine for the Fluffy Cheese Dog. We were able to confirm the laborious handicraft involved in placing the cut cheese on the dough by hand. 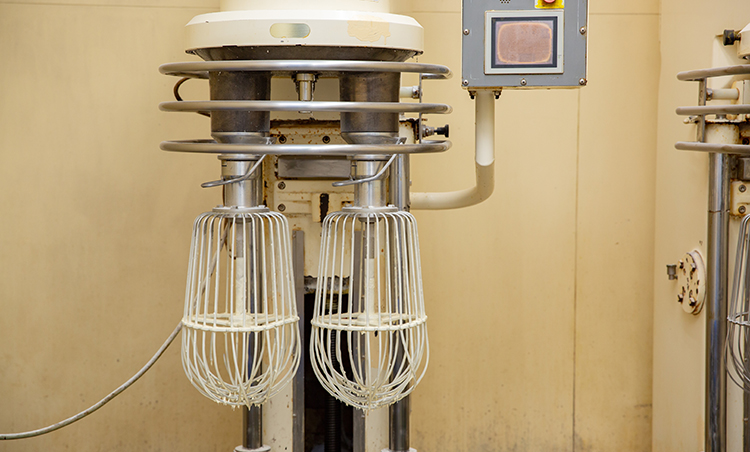 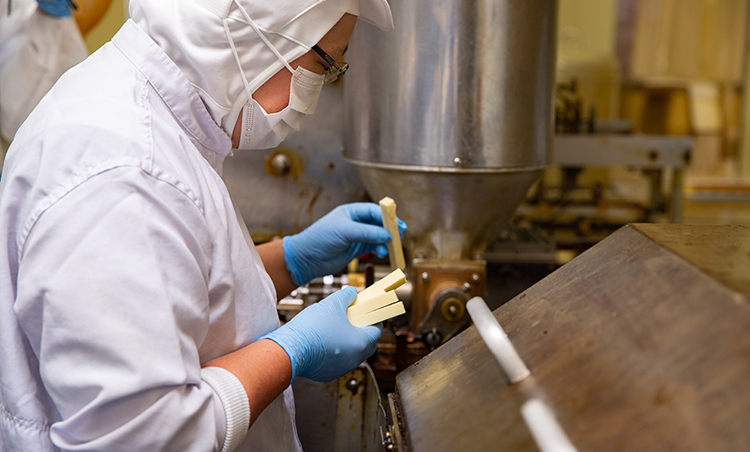 Inserting the cut cheese by hand

Face-to-face dialog with the producer. Plant director, Mr. Kono, replying to questions with an earnest expression.
After the inspection of the production process, a question-and-answer session was held for about two hours. Questions focused on the methods for cleaning the production line and hygiene management.

The plant director, Mr. Kono, gave the following explanation regarding the members’ questions. “Synthetic detergents are not used on the production line or on the machinery that comes into contact with the product. These are wiped clean every day with hot water and, in some places, alcohol. Each Saturday, when there is no production carried out, is designated as cleaning day, and we thoroughly implement the process of washing the floor with a high-pressure cleaner, wiping with a mop and then drying.

Additionally, aiming to obtain the Saitama HACCP certification next spring, the visiting SCCCU group was informed that the staff pushing forward with the preparations, with the plant director playing a central role, are holding regular training sessions. The content of these sessions is then explained to employees in the plant through checklists and morning meetings. In this way, the entire staff at the plant are raising their management level while building up their knowledge and experience as they grapple with each of the many items that need to be cleared in order to obtain the certification.

Moreover, the liquid soap for handwashing was one that is often used in public organizations such as schools, and it was confirmed that it does not contain substances that are banned by Seikatsu Club. However, the liquid soap being used at the plant did include a substance that might possibly cause inflammation of the skin, and the producer was therefore informed that simply washing the hands with soap (pure soap that does not contain surfactants) and disinfecting with alcohol is sufficiently effective. The producer accepted the suggestion from the SCCCU group and promised to consider changing the soap to one recommended by Seikatsu Club.

There were also several other matters that became apparent from the inspection visit. These were communicated to the producer in the hope that they would be implemented or considered.

Joining hands, members and producers continue to raise the quality of consumer materials

The members who participated in the Consumer Materials Step Up Inspection said, “Having the opportunity to see the manufacturing plant, I got the impression that that the company is making greater efforts toward HACCP than I had thought,” and “HACCP certification cannot be gained unless it has permeated through to all the staff in the plant. As well as admiring the great teamwork with which the each of the staff members is making enthusiastic efforts, I felt very happy that our consumer materials are being produced in such an environment.”

In response, President Makino spoke of his ambition. “We have formed a partnership with a small local plant in order to increase the number of different Seikatsu Club confectionary items that we produce. The HACCP management hurdle is quite high for a local plant to overcome, but we would like to continue in the future to strive to provide confectionary that is safe to eat.”

Through the “Consumer Materials Step Up Inspection,” Seikatsu Club will go forward with members and producers joining hands to continually raise the quality of our consumer materials. 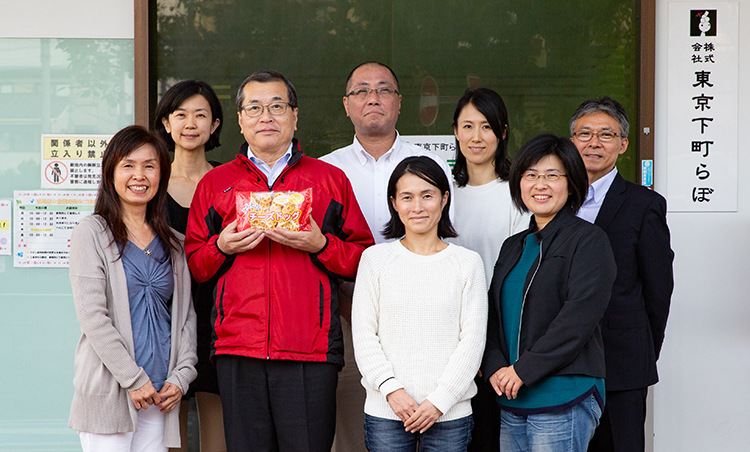