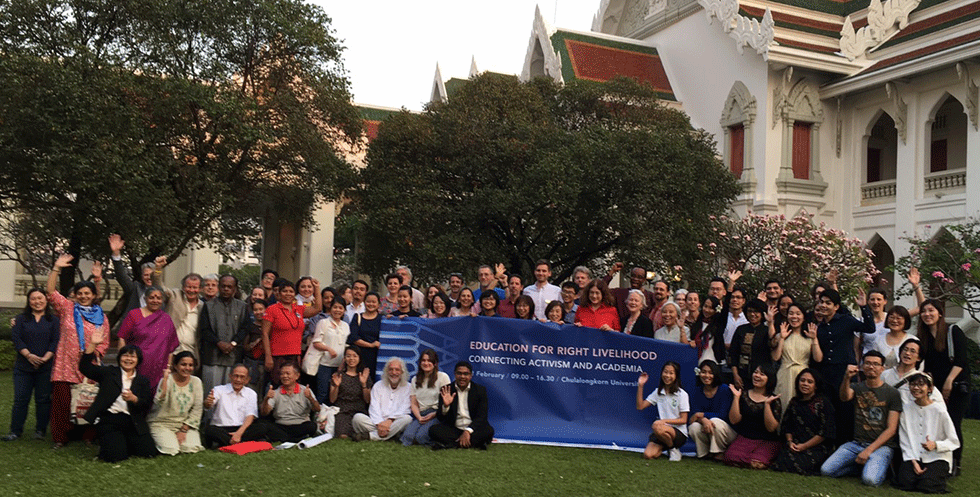 Participants in the Bangkok Conference
Seikatsu Club won the Right Livelihood Award, also known as the ‘alternative Nobel Prize’ in 1989. This award is presented to honor and support people who are working to solve global problems faced by humankind in fields such as peace, poverty, the environment and human rights. To commemorate the 40th anniversary of the founding of the award, laureates from past years were invited to a conference in Bangkok, Thailand. Four Seikatsu Club members attended the conference.

Thus far presented to 178 individuals and organizations in 70 countries, the Right Livelihood laureates count among their number such personalities as the Kenyan Wangari Maathai, who spread the idea of “mottainai” (waste not want not) around the world; director of the movie “The Economy of Happiness,” Helena Norberg-Hodge, and Edward Snowden, who was forced into exile in Russia when he denounced Internet mass surveillance practices by the US government. In 2019, four people won the award, including the Swedish environmental activist Greta Thunberg and the Brazilian Davi Kopenawa of the indigenous Yanomami people.

* Since 2009, campuses of the Right Livelihood College have been established around the world to apply and disseminate the knowledge and experiences of the laureates. At present, the college has nine campuses in universities in Bonn (Germany), Lund (Sweden), Addis Ababa (Ethiopia), Port Harcourt (Nigeria), Valdivia (Chile), Cordova (Argentina), Santa Cruz (United States), Mumbai (India) and Bangkok (Thailand).

Intensive Discussion on Efforts to Combat the Climate Crisis 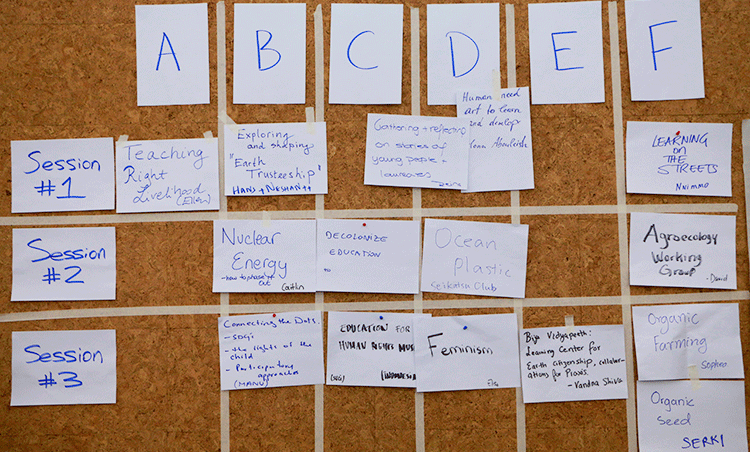 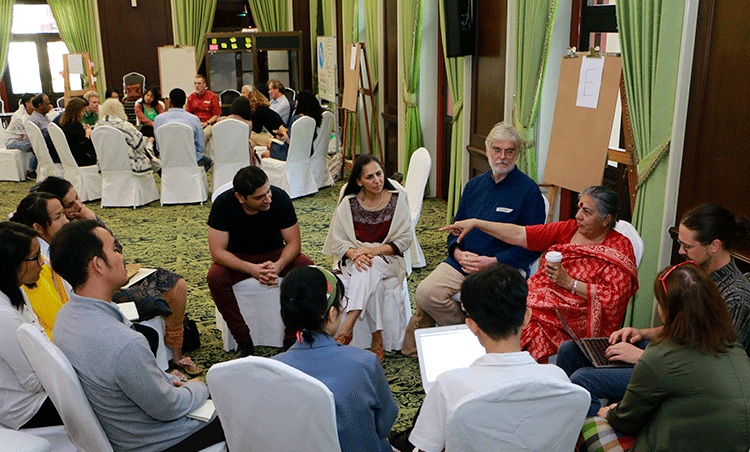 Group discussions in the open space
On February 20, group discussions were held using the Open Space method. Open Space is gaining attention as a method where discussions can be held among a large number of people with differing standpoints while placing them all on an equal footing. The topics are not decided beforehand; the participants suggest the themes they most want to discuss, and then break up into discussion groups for each theme. Seikatsu Club proposed the “ocean plastics pollution issue,” with Ms. Miyuki Kinoshita, Chairperson of the Board of Directors of Seikatsu Club Saitama, giving an explanation of the “GREEN System.” “We unified bottle and jar specifications into several types and retrieve and reuse them to reduce container and packaging garbage, and we are also retrieving and recycling the plastic bags we use for distribution,” said Ms. Kinoshita, introducing the mechanism for the reduction of garbage created by food-producing companies and consumers. Presenting a large number of photos of animals injured by plastic garbage, polluted coastlines and other scenes, Ms. Siriporn Sriaram (who goes by the nickname Vivi) of the Thai International Union for Conservation of Nature (ICUN) reported on the grave situation regarding the ocean plastics pollution issue. In addition, with reference to the wrapping material developed from cassava in Indonesia as an alternative to plastic wrapping materials, Vivi pointed out that “forests are being logged to make cassava fields, and that is resulting in new environmental problems.
We also participated in the discussion on “nuclear energy” proposed by Ms. Caitlin Stronell of the Citizens' Nuclear Information Center (CNIC), who was participating as the representative for the late Jinzaburo Takagi, a 1997 laureate. Cait criticized the stance of the Japanese government by stating, “Runners in the Tokyo Olympic Torch Relay will be running in areas where the radiation dose rate from the Fukushima nuclear accident is high. The government is attempting to disseminate the mistaken message that there is no longer a problem in Fukushima.” Hiromi Fukuzumi, Chairperson of the Board of Directors of Seikatsu Club Chiba, while touching on the current situation where consumers’ right to know is not being guaranteed, said, “Seikatsu Club is also carrying out activities toward a nuclear phaseout, but it is very hard to get people to understand this. The government is also not giving out correct information,” and reported on the Seikatsu Club’s collective purchase of electricity from renewable energy as a practical alternative to dependence on nuclear energy. 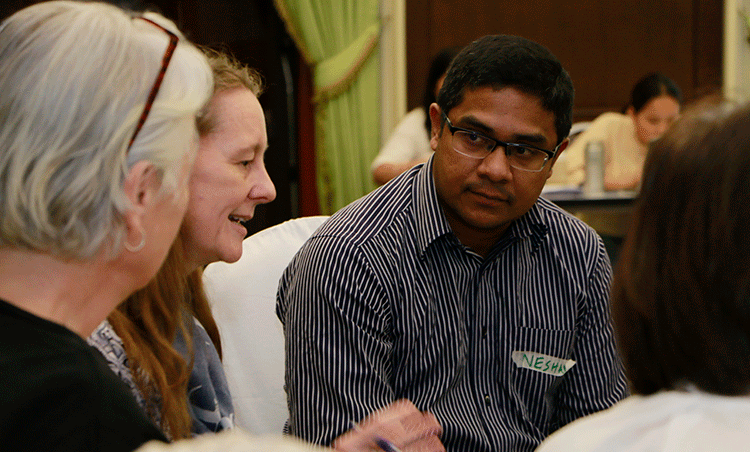 Solidarity for the Future

The second day was held as an event open to the public, with around 60 people participating. After keynote speeches, including a speech by the well-known Indian grass-roots environmental conservation activist Vandana Shiva. Ms. Miyuki Kinoshita put forward an appeal in An Urgent Message for the World, in which she said, “The kind of future we bequeath to our children will depend upon the kind of lifestyle that we choose now… Let’s create the future we want by having everyone living on the Earth choose a lifestyle for social good.” 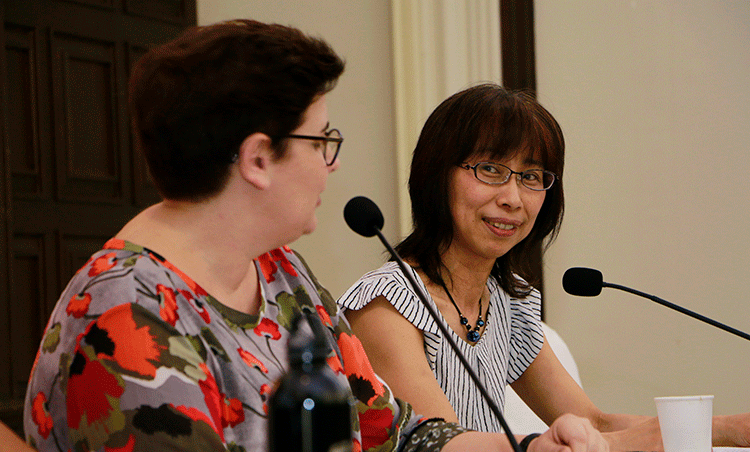 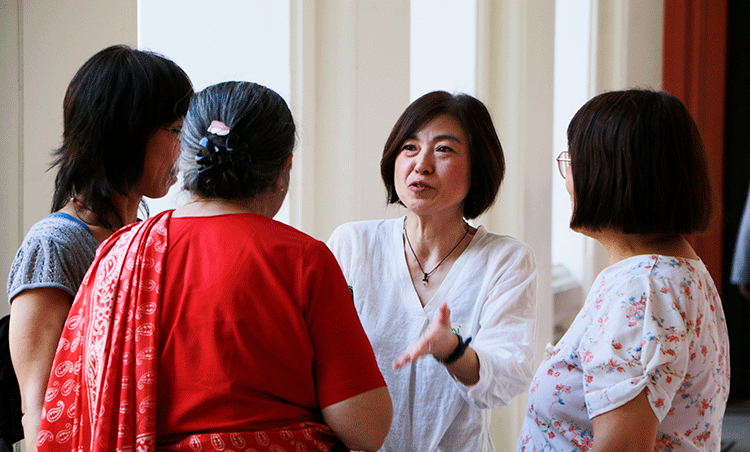 Exchanges of information in the breaks (Ms. Fukuzumi talking with Vandana Shiva)
Lively exchanges also took place in the breaks during the conference. Vandana Shiva recorded a strong message for us (please see the video below), saying, “From the point of women’s activities for safe food, we are at one with Seikatsu Club. Let us strengthen our solidarity in Asia.”

After the conference had ended, Ms. Hiromi Fukuzumi spoke of her impressions by saying, “We have friends all over the world who share our feelings. The Bangkok Conference has given us the power and courage to go forward unflinchingly and with hope.” 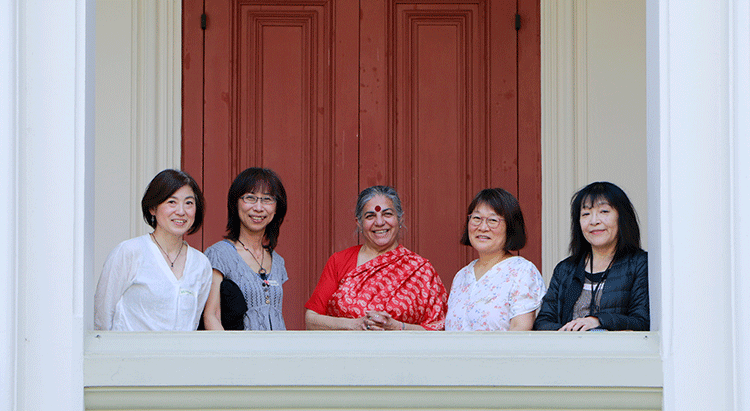 Participants from the Seikatsu Club with Vandana Shiva
【Published on April 16, 2020】
Tweet