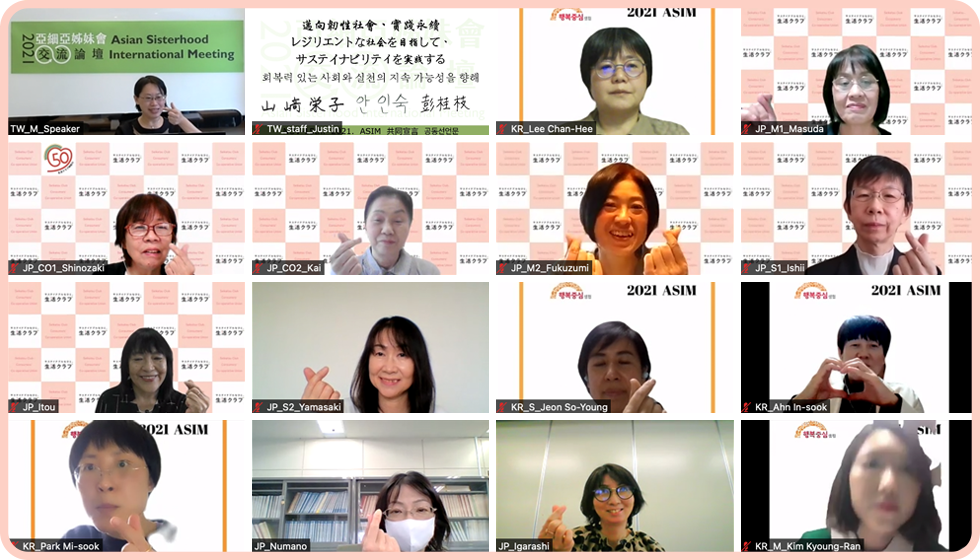 The Seikatsu Club Consumers’ Co-operative Union, the Taiwan Homemakers Union Consumers Co-op (HUCC), and the South Korean Happycoop Union have been learning about each other’s activities since we formed a sister partnership in 1999. In 2019, the Seikatsu Club hosted a representatives’ meeting in the Shonai district of Yamagata Prefecture, and had begun preparations for a symposium in Taiwan in 2020. However, the symposium was postponed due to the COVID-19 pandemic. An online exchange meeting was held on November 15, 2021, with a total of nearly 300 people participating from the three countries.

Efforts for SDGs and Sharing Activities during the COVID-19 Crisis

The exchange meeting was hosted by the Taiwan HUCC. This co-op was established by the Homemakers United Foundation (HUF), established in 1989 to protect the environment. 2021 marked the 20th anniversary of the founding of the consumers co-op.

During the online meeting, each consumers’ co-operative reported on three themes. The first two were “responsible consumption and production” and “waste reduction,” chosen from the goals and targets of the United Nations Sustainable Development Goals (SDGs). This decision was made when learning about the SDGs at the representatives’ meeting in 2019. Later, when preparing for the event, the third theme, “Activities and Issues of Consumers’ Co-operatives during the COVID-19 Crisis,” was chosen in order to exchange information on each of the consumers’ co-operatives’ responses to the pandemic.

Ms. Kazumi Masuda (Tokyo) and Ms. Hiromi Fukuzumi (Chiba) reported for Seikatsu Club on efforts to increase domestic self-sufficiency in line with the eight goals of the Seikatsu Club 2030 Action Declaration, which include the pursuit of domestic production and fair procurement, related to this theme.

Ms. Fukuzumi introduced the activities of the “Tomato School” (cultivation of tomatoes for processing), the “Sea School” (asking producers about problems in fisheries), and the “Farm School” (support for farm work), which are exchanges Seikatsu Club Chiba is implementing with production areas.

Ms. Masuda reported on the activity calling for reservations for the “Preorder Apparé and Harébaré Vegetable Omakase (leave it to you) 4-Item Set,” saying. “By making preorders, producers can ship vegetables without any surplus produce remaining, leading to reduced losses and sustainable production. Apparé- and Harébaré-grown vegetables are vegetables produced without or with reduced use of synthetic pesticides and fertilizers during the growing period.”

For South Korea, Ms. Kim Kyung-ran, Chairperson of the Board of Directors of the Happycoop, reported on “Happycoop practices for sustainable production and consumption,” which include their unique green certification, environmental education and food education, and their efforts to preserve native species.

From Taiwan, Ms. Peng Guei-Zhi, Chairperson of the Board of Directors of the Homemakers Union Consumers Co-op, introduced their cooperation with small-scale farmers to protect sustainable farmland and their efforts to reduce food loss.

Ms. Kiyomi Ishii (Saitama) and Ms. Eiko Yamazaki (Hokkaido) reported for Seikatsu Club on the GREEN System, which promotes the use of reusable bottles.

For South Korea, Jeon So-young, Chairperson of the Board of Directors of the Happycoop GoyangPaju Consumers’ Co-operative, introduced their recycling of milk cartons into tissue paper; soap-making using waste cooking oil; their campaign to carry eco-bags, handkerchiefs and tumblers, and efforts to make eco-bags from clothes and banner-flags for renting out at stores.

Ms. Lin Bang-wen, Chairperson of the Board of Directors of the Homemakers Union Consumers Co-op of Taiwan reported on efforts to collect beverage PET bottles, convert them into pellets, and recycle them into bottles for the liquid soap that the Co-op is now promoting. 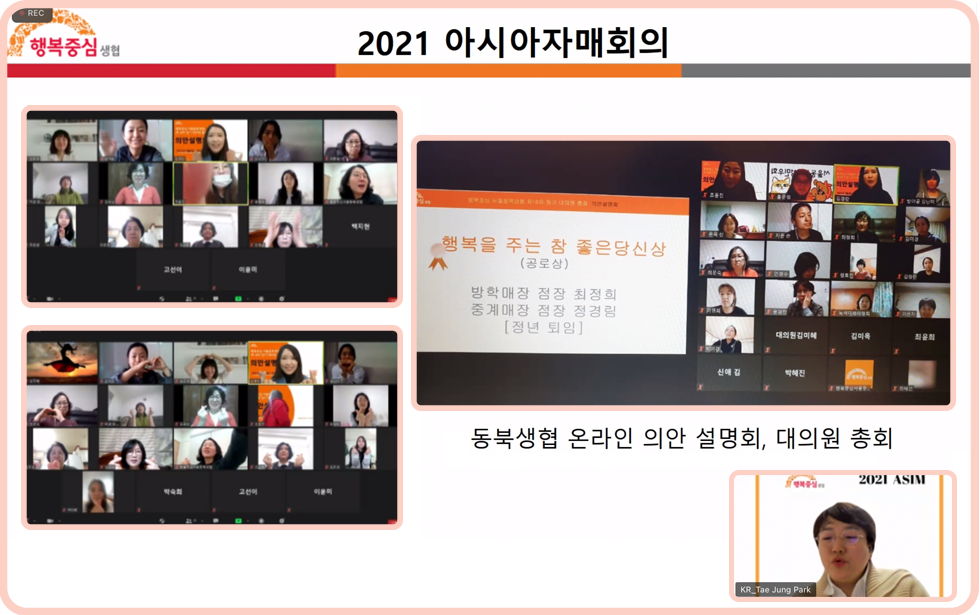 Report on the activities by the South Korean Happycoop Union during the COVID-19 pandemic. Members’ Meetings are also held online in South Korea

Reporting for Seikatsu Club, Misako Shinozaki (Kanagawa) and Kyoko Kai (Nara) explained that, while “prioritizing the supply of food and basic daily necessities at the same time as maintaining the production system and supporting producers,” Seikatsu Club is providing emergency support rice and assistance to people facing difficulties and support groups through donations from their members. It was also reported that the “Great East Japan Earthquake Reconstruction Support Festival” organized by Seikatsu Club Kanagawa was held online to prevent the spread of infection.

Ms. Park Tae-jung, Chairperson of the Board of Directors of Yongsan Consumers’ Co-operative, reported for South Korea and Ms. Wu Pei-chun, managing director of the Homemakers Union Consumers Co-op, reported for Taiwan. We found that all three countries were struggling with a rapid increase in online orders and new members signing up online, as well as holding online meetings due to the inability to hold face-to-face activities.

The Happycoop’s Living Materials Forum, an important event for interacting with producers, was held online. Ms. Park said, “Although I was disappointed that our important meeting opportunities were interrupted by the COVID-19 pandemic, we were able to continue the coexistence between producers and member consumers, even though we were not able to hold face-to-face discussions.” Ms. Wu explained about activities to connect with the community during the COVID-19 pandemic by saying, “Local members initiated activities such as calling for the donation of supplies, which were then presented to medical professionals, thus fulfilling the mission of the of our co-op, which is to have concern for the local community.” 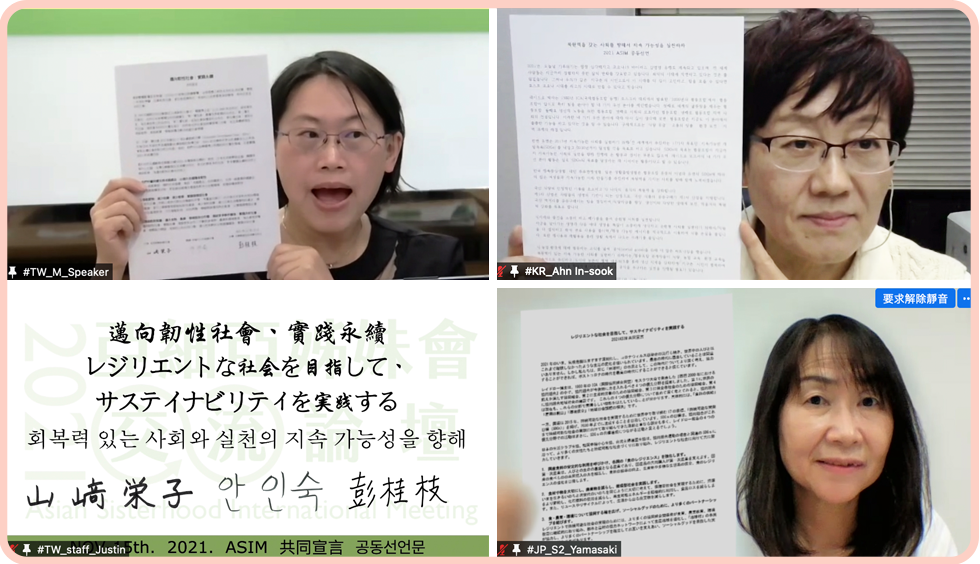 The three countries adopt a joint declaration. Ms. Eiko Yamazaki is seen in the lower right.
At the end of the meeting, representatives from each consumers’ co-operative read out the Joint Declaration of the Asian Sisterhood Conference 2021, “Practice Sustainability in the Aim for a Resilient Society,” in all three languages.

Ms. Eiko Yamazaki, who served as the leader of the Seikatsu Club Consumers’ Co-operative Union preparatory team for this meeting, expressed her impressions as follows.

“I understood that during the COVID-19 pandemic each consumers’ co-operative was doing what it was intended to do while struggling to continue collective purchase and membership activities, as well as trying to seek out new kinds of activities. Now, in the midst of the COVID-19 pandemic, I believe that we must work together with our friends and local communities to make efforts to “practice sustainability in the aim for a resilient society,” as in the title of our Joint Declaration. Since our meeting was held online, all the members of the board of directors in Hokkaido were able to participate, and despite the language barrier, it was wonderful to be able to feel the presence of our Asian colleagues.”
[Published on January 29, 2022]
Tweet