Seikatsu Club Consumers’ Co-operative Union, together with Sakata City, has been promoting the Shonai Welfare Community Initiative. Based on the concept of a “participatory lifestyle,” the initiative will support “relocation” from urban areas and participation in community development with local people. At the end of 2021, it was decided that the project and the facility complex where it will be based would be named “TOCHiTO.” Construction is scheduled to begin this spring for completion in December, when it will be opened for people to move in. This initiative proposes a model for revitalizing regional cities and is expected to lead to the formation of sustainable production areas for urban residents.

A life made possible by production areas

Logo of the relocation base TOCHiTO 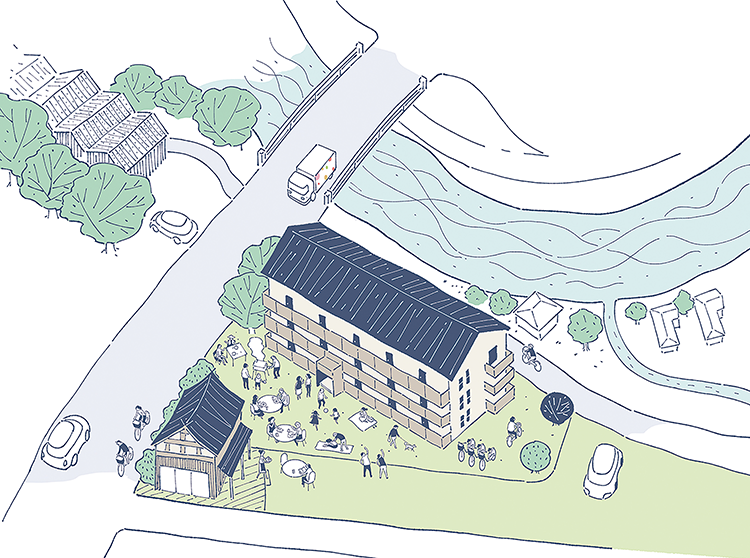 The Sankyo Warehouse, a rice storage warehouse built in the Meiji period, along with its magnificent Japanese zelkova trees, is a national tourist attraction and a symbol of Sakata City, Yamagata Prefecture. The planned site for the construction of TOCHiTO, the Shonai Welfare Community Initiative facility complex, is located across the street from the warehouse. It is close to Sakata Port, and Mt. Chokai can also be seen from the location.

The Seikatsu Club Consumers’ Co-operative Union (SCCCU) and Sakata City initiated this project in 2016. Since then, the concept has been realized through cooperation with local producers, universities, companies and NPOs and others.

The spark that set off the initiative was a survey of Seikatsu Club members in 2015. The survey brought into perspective the need to “find a final place to live while still healthy” or “to live close to the nature.” Ito Yuriko, Chairperson of SCCCU, explained the location by saying, “We thought it would be best if we could offer an option in a production area familiar to consumers.” Among the many production areas, the Shonai region, where Sakata City is located, has so many partner producers that it is known as “the Seikatsu Club food base.” The Shonai/Yuza Solar Power Plant, constructed in the town of Yuza, adjacent to Sakata City, supplies electricity to our members through Seikatsu Club Energy Co., Ltd.

TOCHiTO is the name of the entire facility, including the three-story residence building, the two-story community exchange center, and the square for relaxation that lies between them. The residence building was named “TOCO” because it is a place (tokoro) to live with local people, and the community exchange center building was named “COTO” because it is a place to participate in something (koto) with the community. Each of these also embodies the meaning of creating the future by taking root in the Shonai location.

The residence building will consist of a total of 18 residences from studio apartments with kitchenette to two-bedroom apartments, of which the latter can also be used as share houses. Parking spaces will naturally be provided, each house will have an external storage shed, and electric cars and electric bicycles will also be available for use by residents. Each room will be equipped with a videophone and an emergency call button that connects to a security company in the event of an emergency. No medical or nursing care facilities will be built on the site, but a partnership with local hospitals and nursing care providers has been established to provide welfare services as needed. It will also be possible to buy consumer materials through collective purchase by joining the consumers’ co-operative Shonai Shinseikai, established by producers in the Shonai region and one of the independent member co-operatives of SCCCU. The opinions of members who participated in the “Study Group on Life in Shonai” planning, conducted by the Seikatsu Club Consumers’ Co-operative Union of Mutual Aid, are reflected throughout the design of the residential building. The “participatory lifestyle” is an element that has been emphasized from the design stage.

On the first floor of the community exchange center is a multipurpose space where local NPOs will have offices and residents as well as local people will be able to relax and socialize freely. It is expected that in the future, residents will be involved in the planning and management of various events where the residents can learn, interact, and experience while encouraging local residents to participate.

The second floor will consist of rental offices for companies and individual businesses. It is also planned that the office of Shonai Renewable Energy Generation Co., Ltd., which operates the Shonai/Yuza Solar Power Plant, will be located here.

Ms. Ito says, “TOCHiTO’s electricity will be supplied by renewable energy. If you move in here and join the co-op, you can use Seikatsu Club electricity, participate in the revitalization of the community, and hold exchanges with the producers nearby. I would like to put out a call that brings to the forefront the appeal of a lifestyle that is much more than simply a relocation.”

Many people in their 50s and 60s are now seriously considering moving to TOCHiTO, and some have in mind the idea of living in two locations. The reasons vary, but quite a few people seem to be attracted to the “participatory lifestyle” with an eye toward the next stage of their lives.

However, those in their 50s still have a long way to go before they will receive a pension, and they would need to carry a heavy burden of rent while living in two places. In response, Seikatsu Club has asked the Shonai Council, an association of partner producers that aims to promote regional recirculation, to consider offering work to the residents. By gathering information on the contents of jobs for each season, whether or not remuneration is possible, and the feasibility of commuting to the workplace, we plan to match the needs of the residents who want to earn income with those of producers who are suffering from a shortage of labor. We will also introduce residents to work opportunities that are not premised on remuneration, such as farm work support and tasks that need to be carried out in the local area.

For the planning and management of events held at COTO community exchange center and management of the facilities, such as snow removal and cleaning, we are also considering asking residents who agree to the system to receive payment in local currency. If one of the businesses with an office in the building comes up with an interesting business idea, it is possible that this could also lead to employment.

“In terms of building a community and having people participate in various tasks, our members have a vast amount of experience and abilities, and I hope we will be able to make use of the power of such people,” says Ms. Ito. Depending on the situation, Ms. Ito also hopes that the people in the facility, together with local people, will create their own unique lifestyle.

Another objective of this initiative is to raise the sustainability of production areas. Currently, farming, mountain, and fishing villages across the country are facing huge difficulties due to problems such as climate change, an aging population, and a shortage of workers. Seikatsu Club partner production areas are no exception.

“For half a century, we’ve been a collective purchase movement that supports food through consumption, but we’re now entering an era where that alone will not protect the food of the future,” explained Ms. Ito with conviction. To sustain production, new ways of consuming and the revitalization of local communities are essential. SCCCU has also initiated attempts to enter the agricultural sector itself.

One of these is an experiment in Yuza Town to grow rice varieties adapted to climate change. In partnership with the Yamagata Integrated Agricultural Research Center, we will consider handling the resulting rice as a consumer material in the future.

In 2018, the Ministry of the Environment launched the Regional Circular and Ecological Spheres (Local SDGs), an initiative to harness and circulate latent regional resources such as food, energy and human resources. The initiative also includes a target to create self-reliant, decentralized societies in each region while promoting cooperation between rural and urban areas.

The history of Seikatsu Club deepening its relationship with the Shonai region since the 1970s can be said to be precisely a history of the practical implementation of the local SDGs. Based on these achievements, TOCHiTO is taking a step further by adding the novel factors of “living” and “participating” to the relationship between production and consumption in an attempt to connect rural and urban areas.

Ms. Ito said, “I look forward to Shonai acting as a model that will also enable residents and producers to work hand in hand to promote regional development in other partner production areas.”

The Shonai area will be one where relocated residents take root and build the area together with local people. It will be interesting to watch how the project will develop in the future. 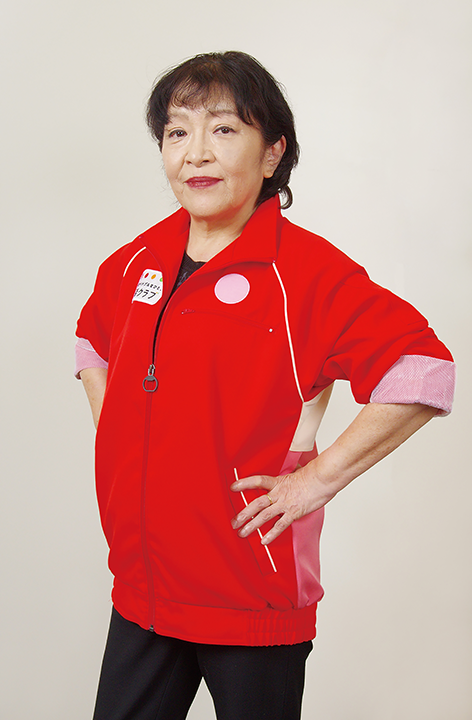 Photo: Yoshinori Mido
Text: Roie Okubo
* Originally published in the February 2022 edition of Seikatsu and Jichi as “A Sketch of the Seikatsu Club Dream”
Published on February 28, 2022
Tweet