Supporting Safety with the Radioactive Testing

Soon after the accident at the Tokyo Electric Power Company (TEPCO) Fukushima Daiichi Nuclear Power Station in 2011, Seikatsu Club Consumers’ Co-operative Union (SCCCU) established a testing system for residual radioactivity in food, and has continued to test food for radioactive contamination ever since. In September 2011, Seikatsu Club purchased its own measuring instruments and also strengthened its testing system during the following few years. As of January 2022, more than 139,000 tests have been conducted, the results being published on the SCCCU website. As 11 years have now passed since the accident at the nuclear power plant, the meaning of the radioactivity testing is once more being reconsidered.

A Sudden Outburst of Concerns

“Is it OK to drink milk?” “I want to order vegetables from specific production areas.” Very soon after the accident at the TEPCO Fukushima Daiichi Nuclear Power Station in March 2011, our members voiced countless concerns about the radioactive contamination of food.

In 1986, after the Chernobyl nuclear accident in the former Soviet Union, SCCCU set an autonomous limit for radioactive cesium at 37 becquerels per kilogram (Bq/kg), 1/10 of the national standard, and suspended the supply of consumer materials that exceeded that limit. Seikatsu Club commissioned an outside organization, the Radioactive Contaminated Food Measurement Laboratory, to conduct testing on about 60 food samples a year, limiting the testing to items that were possibly affected by the Chernobyl disaster. However, as the accident at the Fukushima Daiichi Nuclear Power Station occurred in Japan, the preconditions for countermeasures were completely different. Without a testing system in place, it is physically impossible to measure all possibly affected food items from a wide range of raw material production areas. Considering the extent of the impact, it was not realistic to suspend the supply of all products, and even if measures were taken by each production area, they could not be said to be in compliance with our autonomous standards if measurements could not be carried out. For the time being, there was little option but to continue to supply consumer materials based on measurements at the time of shipment in accordance with the new national standard of 500 Bq/kg.

Some Seikatsu Club members voiced the opinion that “consumer materials should be managed based on the existing autonomous standards,” and discussions on this continued at the SCCCU Board of Directors. Mr. Hiroshi Tsuchida of the SCCCU quality control department, who was in charge of countermeasures at the time, recalls the anguished decisions he had to make, saying that while he could fully understand the feelings of the members who were concerned about radioactive contamination, “the problem could not be solved by cutting out producers, who are themselves victims. It was necessary to work together on countermeasures against radioactivity and decontamination.”

Evolution of Seikatsu Club’s Testing for Radioactivity in Food

While implementing the testing system based on the provisional national standards, Seikatsu Club continued to keep track of the situation regarding radioactive contamination and began to work toward establishing new autonomous standards. In September 2011, six months after the nuclear accident, Seikatsu Club set up its own radioactivity measuring devices (two NaI scintillation counters) to conduct weekly tests on all items. According to Mr. Tsuchida, “Although it was possible to find data about nuclear accidents overseas from the research literature and so on, we did not know how Japanese crops would be affected in Japanese soil until we measured them, and so we continued to test them one by one.”

In April the following year, based on the results of nearly 20,000 tests, new autonomous standards were introduced provisionally, and after discussions with regional Seikatsu Clubs and producers, these standards were formally introduced in August.

The following three points were taken into consideration when setting the new autonomous standards.
・The standards should be acceptable to both members and partner producers.
・In the case that supply is suspended due to the standard being exceeded, producers’ costs should be properly compensated.
・In order not to fall into the one-sided view that “it is sufficient if radioactivity test values are low,” it should be kept in mind that the overall value of consumer materials should be communicated to society.
The national standard was revised in April 2012 to 100 Bq/kg for general food items, but Seikatsu Club’s autonomous standard is half that level. Regarding the grounds for the Seikatsu Club standard, Mr. Tsuchida says, “The government uses only internal exposure from food and drink as the criterion, but considering the effect of exposure from external radioactivity, we decided that it was necessary to roughly halve the national standard.”

Some producers agreed with the setting of autonomous standards, saying, “Setting strict standards will give members a strong sense of security.” On the other hand, some producers expressed anxieties such as “How long will the effects of radioactivity last and how long with the tests continue?” and “What will happen if the autonomous standards are exceeded?” At the same time, a major supermarket chain set the goal of “zero radioactive substances.” However, as long as radioactivity exists in nature, it is impossible to claim that any food is free from radioactivity. Some people voiced the opinion that this could lead to a futile race for lower radioactivity standards. 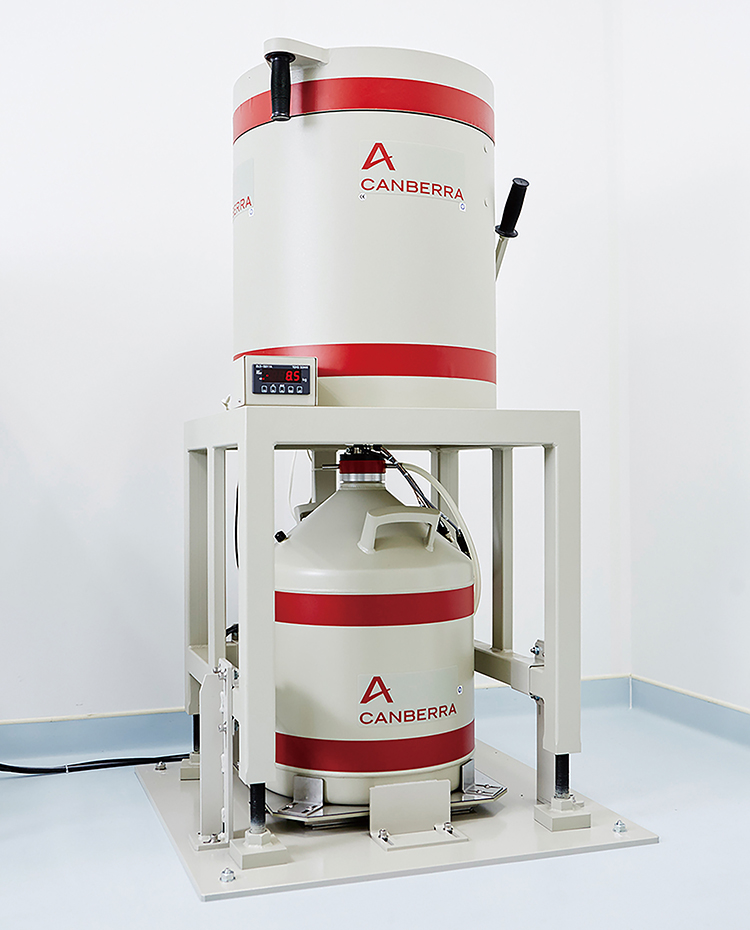 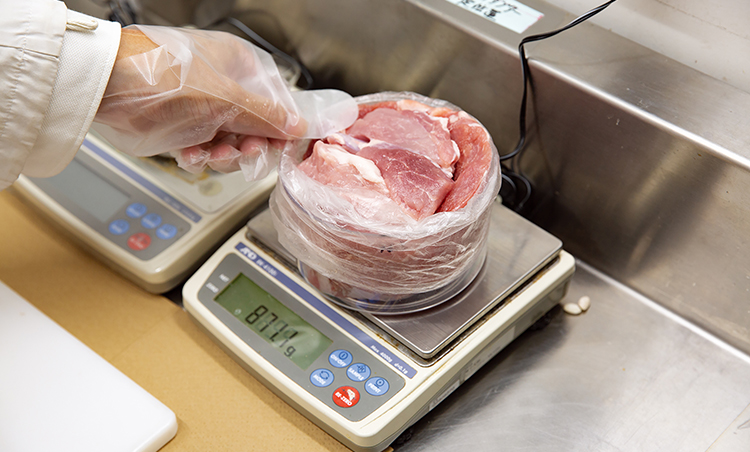 The sample is cut into small pieces, and measured by placing the sample in the measuring container 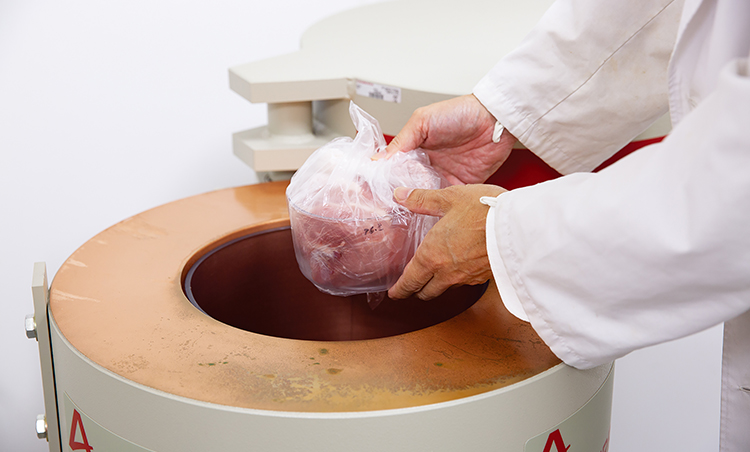 The Significance of Continuing Measurements

Even if the supply of consumer materials were to be suspended due to the autonomous standards being exceeded, if the level of radioactivity fell below the national standard, the producer would not be eligible for the government’s or TEPCO’s official compensation system. In June 2013, from fears that producers might be hit by serious losses, Seikatsu Club established its own Fund to Support Producers Facing Radioactive Contamination (Producers Support Fund) to compensate for losses in the case that the supply of particular consumer materials was suspended. The fund was created with contributions from Seikatsu Club members and producers, as well as from regional Seikatsu Clubs, about 70 million yen being donated to the fund, including 20 million yen in donations for earthquake disaster reconstruction.

As the tests continued, some lotus roots and shiitake mushrooms, which tend to absorb large amounts of trace elements, exceeded the autonomous standards. Producers who were required to suspend supplies were compensated from the Producers Support Fund. However, compensation does not make everything right again, and producers who could not supply consumer materials to members experienced great suffering. Thus, to eliminate the impacts of radioactivity as quickly as possible, the fund has also been used to support producers who implemented decontamination efforts.

Seikatsu Club later introduced a germanium semiconductor detector, which enables more precise tests, expanding both the quality and quantity of tests with six measuring instruments. Having done so, the autonomous standards were revised in 2016 to half or less of the previous standards. Even now, 11 years after the nuclear accident, about 8,000 radioactivity tests are still being conducted annually.

“Even if no radioactivity is detected for quite a long time, the radioactivity detection equipment would be useless in an emergency if was not continually in use. As more nuclear power plants are restarted, the possibility of another accident occurring increase,” says Tsuchida. “It is necessary to maintain the provision of information to both our members and producers regarding what degree and in what items radioactivity has been detected. I would be happy if everyone would take a hard look at the results and think about energy issues,” he says. Even if something happens, the first step to solving the problem is “knowing what you are eating.” The need for the radioactivity testing of food will continue as long as the issue of nuclear power plants and radioactive waste exists.
National and Seikatsu Club Radioactivity Standards
Seikatsu Club Consumers’ Co-operative Union, Autonomous Standards (2021 edition), p.12 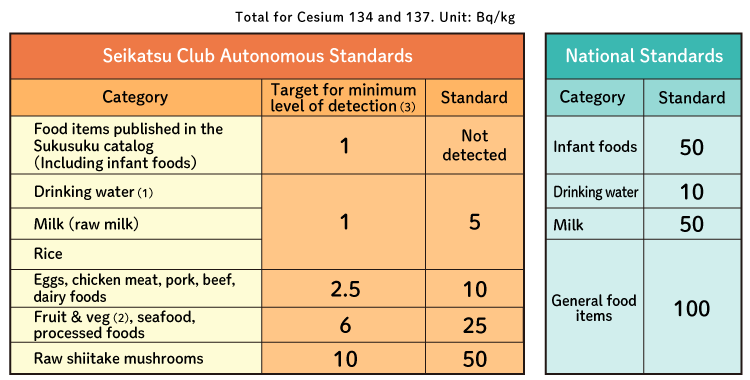 (1) Drinking water includes not only "green tea" as in the national standards, but also teas such as barley tea and powdered green tea.
(2) Includes mushrooms other than raw shiitake mushrooms.
(3) Minimum level of detection indicates the detection accuracy. This is termed a target value because  test results vary depending on the density, etc. of the sample.
Text: Toshiyuki Ushijima
* Originally published in the March 2022 edition of Seikatsu and Jichi as “A Sketch of the Seikatsu Club Dream”
Published on March 30, 2022
Tweet